America's Fed Up With The Rigged Two-Party System, Period!

It's Time For A Cool Change In America's Political Process. 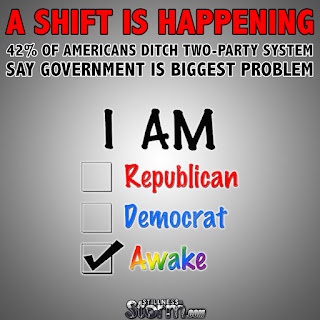 What choices has the presidential election in 2016 given Americans? A corporate brand [Donald Trump] versus a political dynasty [Hillary Clinton.] Donald Trump and Hillary Clinton have emerged as the nominees for their respective parties Trump a Republican and Clinton the Democrat.

What has resulted is upheaval in both establishment parties.  Trump talks about building a "Great Wall" on our Southern border. Trump even claims he will make Mexico pay for this wall. Trump's unfiltered conservatism has caused shock waves throughout the Republican Party establishment. Donald Trump has shown more showmanship than political savvy and his rhetoric has no practical political diplomacy whatsoever. Trump has insulted fellow Republicans like John McCain (R-AZ).

Trump called Hispanics rapist and murders. Trump proclaimed America's leaders as just plain stupid. Many pundits at the beginning called Donald Trump's run for the highest office in the land nothing more than a sideshow. Mainstream media claimed he was an illegitimate contender. What these out of touch pundits failed to realize their marginalization of Trump was a factor that helped him. The media came out with a narrative that suggested Trump was not a mainstream candidate. Trump was a joke with funky hair and the people who supported him resented this narrative. People know matter their " Party Identification" don't want news media telling them who they should vote for under any circumstance.

On the Democratic side, Wall Street and Corporate America darling Hillary Clinton while less sensational than Trump has shown by her record to be just as conservative as any moderate Republican and has faced serious and ongoing criticism from the Progressive faction within the party that mostly supported her rival in the race, Bernie Sanders. Hillary Clinton has once again got herself into a scandal by misusing and overstepping her authority regarding her handling of classified information on her private server and has bolstered already unfavorable trust that many Americans have of her. The issue is still fluid as of the rendition of this essay.

After wiping clean her email server some 30,000 emails total many Americans from all spectrum's are comparing her to Richard Nixon. Right now, more and more Americans are getting sick and tired of politicians, in this case, Hillary Clinton trying to avoid the issues and skating by under suspicious legal and ethical practices. All one has to do is look at the Democratic Party platform for 2016 and see the party has moved to the right on many of the issues.[See: The Democratic Platform is Not Really That Progressive, and Won't Unite the Party.]

The Election of 2016 Has Changed How America's Two Major Parties Are Defined. 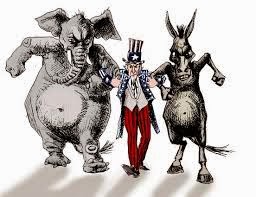 Even though, Bernie Sanders bid for the Democratic Party nominee wasn't successful his messaging and narrative was an American political success story.[See: Bernie Sanders Supporters Are The New American Revolution And It's About More Than Bernie! ] GOP white voters many who left the Democratic Party some 50 years ago have become unruly putting it mildly. There have been many acts of violence at Trump rallies. [See Article] On the Democratic side, real Progressives and young voters alike are rejecting the " Third Way" politics of the party's elites. [See: Corporate Democratic Party Think Tank ‘Third Way’ Exposed] Some may think these feeling are short-lived ones but our research here in the House of Public Discourse suggest otherwise. We see a dramatic change looming on the horizon and to coin a phrase the “Storm Is Coming."

People Who Identify Themselves As Political Independents Is On The Rise In America.

According to recent polling, the Republican Party is in serious trouble. People who identify themselves as Republicans is at a 25 year low. [See Source]  The Democratic Party while not as bad as the Republican Party has not seen any real increase in membership until the current run by long time independent senator from Vermont Bernie Sanders and have blown that to kingdom come by the actions of vote rigging and sabotage by the Democratic National Committee. [DNC]

In short, more and more people from all walks of life and backgrounds have had their eyes opened to the political corruption in our country and the light bulb has been turned on for good in this writer's view. With access to more information in our digital world, the American voters are slowly but surely becoming savvier to insider politics. The comparisons between the two major parties have never been so closely related than in the present.

There are no real differences in the party of blue and the party of red. They use different labels they pretend to compete with one another while they both are beholden to the same paymasters. They both conspire under the table with one another and it's the two party system that has been the enabler. As a result of all these factors a recent Gallup poll has revealed that over 40 percent of Americans now identify themselves as independent. [See Source]

This rise is a result of many Republicans who became jaded by Bush, Jr  second term in office and now Democrats who have seen President Obama support incognito trade deals, supporting drone strikes, not supporting the labeling of GMO's and now refusing to admit the election process was rigged claiming it was nothing more than a conspiracy theory. What happen to transparency? What happen to "Hope and Change? While the economy improved under Obama who benefited from it? Under the Obama Administration, income inequality rose and the distribution of this new wealth went straight to the top. Nothing changed at all. [See Source]

America's Fed Up With The Rigged Two-Party System, Period!

Partisan politics has always created a lot of drama in America. This partisanship is the main reason that most Americans feel ambivalent towards politics and why getting things done inside the beltway has become so hard. Gridlock is the order of the day in our nation's capital. With the recent events in this year's Democratic race, there is a huge disillusionment with the two-party political system in America. People are screaming and protesting for a real change in our political process from start to finish. The free thinking American sees what's going on here. Growing numbers of these free thinkers are rejecting both the Democratic and Republican parties. Based on the latest Wall Street Journal poll only 21 percent of Americans claim they are Republicans while only 29 percent claim to be Democrats.

Groves of Americans have lost faith in our political system. Some estimated 67 percent of us have disenfranchised ourselves from the process altogether. Polls have shown that only 25 percent have a strong faith in our courts, 15 percent strong faith in our executive branch, and only a 4 percent strong faith in Congress. [See Source] What makes all these numbers so affright is that the two party system has pinned us in a box. We are told that we can only choose from the two party nominees and to do otherwise will cause them to lose. Vote Shaming! Why the campaign of Bernie Sanders has really won in spite of all that's happened is that now there is a guidepost to formulating a fair and open discussion on the issue. It is time and long overdue to have a real debate about the pluses and minuses of the two-party system. Our democracy not only needs this debate it demands it. And, right now, not tomorrow is the time to do it.

If all Americans no matter their background can't bring their affirmative values to bear in their choice for a political candidate what good is our democracy anyway moreover can we actually call our governance a democracy in the first place? The House of Public Discourse would suggest what we have now is politics of fear. [ See: The Politics Of Fear And Anger Have Gone Viral In America]


What Is The Solution?

There is a solution to this politics of fear. Voting Reform? These reforms could be implemented on both the state and federal levels very quickly. These legislatures could invoke rank choice voting for example. Which is used in many countries around the world and on the local level in many U.S. cities right now?

As it stands right now the state of our Democracy is one that tries to eliminate opposition voices. In turn, by doing so, the results has alienated a majority of Americans from taking part in the process. In our history, America has invaded countries that practiced such alienation. We bomb them and call it tyranny. In Democratic states who are concerned about their vote being split, we [House of Public Discourse] would encourage you to talk with your state legislators and tell them they can pass the solution right now that will prevent any so-called spoiling of the vote. Enough with the vote shaming pass measures like the one offered in the above to avoid such political disasters you fear the electorate with.

Why Have They Not Done This Already?

In a word, FEAR! Both political parties rely on it. Why do they rely on fear? Because you, we, us, are not their major concern. Their influence peddling corporate donors are who they serve and protect not John and Suzie Q public. Their refusal to fix this addiction has been exposed by the Bernie Sanders run for the presidency and this refusal is cause for you not to vote for them and to do so based on their narrative of fear only makes you an enabler of this political corruption.