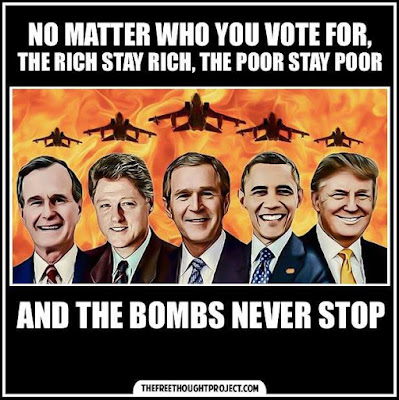 We Americans are the ultimate innocents. We are forever desperate to believe that this time the government is telling us the truth. [ Sandy Schanberg-Former New York Times Reporter]

America's presidents and pundits keep spinning us towards death. Since World War II we have seen an escalation of US military actions across the world. Massive missile strikes and troops station all over the globe. There have been all out wars and countless occupations.

The public face of the reasons for these military actions has varied. But, the one thing they all have in common is geopolitical interest. These interests are complex and they exist everywhere. These wars for geopolitical interest have risen their ugly faces at different times and different places.
These wars haven't emulated this complexity. Over the last 50 years, the decisions to liberate and use military force has been left up to a group of elite Washington policy makers and the lobbyist and special interest that line their pockets.

Politicians and Bureaucrats whose rationale for war only comes into the public view after leaks or the declassification of documents. Years after the bombs and been dropped and the dead often innocent citizens have been buried and the troops have come home.

What our research has found here in the House of Public Discourse is that in our press we get the piss down my back and tell me it's raining version for the reasons for such military actions. We never get the real skinny on the reasons and cost for these imperialistic corporate driven actions.

What we do get is a water downed easy explanation for the justification of the actions all in the name of peace. Which reminds me of a one-liner from one of the greatest political comedians of our time George Carlin. ''Fighting for peace is like screwing for virginity.''

What we have not gotten from mainstream corporate owned media, again and again, is crucial information on the real reason for our countries consistent bullying of the affairs of other nations. In fact, what we get is a storyline not intended to inform us but one that's goal is to generate enthusiasm and support for war.

War Propaganda is a tradition in America. However, it remained in the shadows of American psyche until the fiasco we know as the Vietnam War. As a youth, I remember seeing Walter Cronkite on the evening news and the war causality reports coming on the screen and what I remember most was my family the adults looking at them like they were a score in a football game. I remember thinking even as a nine-year-old why are we fighting this war in Vietnam? I saw the protest going on around the country and when I would ask my parents about this their reply was to stop the spread of Communism. I remember like yesterday asking, why don't those people have a right to choose their form of government like we do? I remember President Johnson's speech saying we were fighting for the principles of self-determination. Saying that the people of South Vietnam had the right to choose their own course. So, our boys were dying over there so that South Vietnam could hold fair elections.

Of Course, I did not see this distortion of the truth as a minor but I do remember having serious reservations about it and how I tended to favor those awful dreaded long-hair hippy freaks as my grandfather would call them.

But what is striking to this writer is how since the Vietnam War how presidents have used this template for lack of a term to sell our nation's military interventions across the world. When you look back on the Vietnam War this model for gaining support has not changed. The names have but the system has not. While there have been differences in these assorted conflicts, our research has found parallels.


War and conflicts don't just appear out of nowhere. There are foundations and cases to be constructed. And, as we now know often with deception. The Iraq War ring a bell!

The use of propaganda to stir up the masses for support of war isn't new. Leaders all over the world and throughout history have used it[propaganda] to sway their populist often wary of war. The tried and true methods of nationalism, patriotism, and the channeling of anger and fear. In the United States since World War II have used these mechanisms as a prelude to war and occupation many times.

We are presently seeing this same type of message used by both political parties today. There is this rush to judgment that Russia was the reason for Hillary Clinton's loss in 2016. With little to no evidence and furthermore these proclamations being made by the same people who have lied and distorted facts for over five decades now. George Bush the second had his " Axis of Evil." It's always America the good against the empire of evil. Whether it was then the Soviet Union now Russia, or Al Qaeda, Hamas, and Isis we are the do no evil good guy. It provides the way to legitimize US plans of war and regime change foreign policy.

There always seems to be this comparison of our adversary’s leader to Hitler and other notorious bad actors from history. Never do we get a clear image from our bought and paid for the press so that " We the People" can put these images into proper perspective. The frames we get are always that these leaders are barbarians and now President Trump is not. Right!

It's clear to this writer it is safer and more powerful to just leave the present facts out that paint a different picture than to lie about them. More times than once has our government helped these evil empires and their Hitler-like leaders out with weapons, money, and other essentials when it served our corporate war interest. Saddam Hussein and Osama Bin Laden ring a bell!

This selective form of history backed by fear-based appeals has become an obvious pre-war pattern in America. The claim that America uses its military force with great reluctance is one of the biggest sales scams ever. We always claim some virtuous reasons. Secure freedoms and democracy. This hyperbole on democracy is part of the system to convince people and those distasteful things which must be done.

Bombing and droning and killing other nations innocent women, children, and citizens are necessary to secure our freedoms and democracy. It's the adage if you repeat something long enough people will believe it. These are all forms of propaganda and they are loathsome and scandalous.

Let's clear something up here. I and I would say most American's want to help other people in other countries who are impoverished. You might not think so by listening to right wing media. But, using these impoverished people as a scapegoat for war when the real reasons are those we mentioned earlier withheld from us is criminal in this writer's view. Syria for example.