The GOP Assault on Social Security! 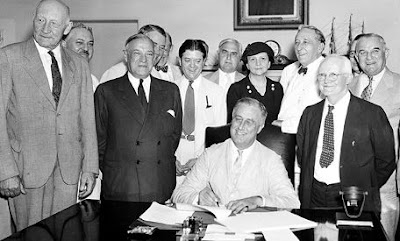 We are in one of the most exciting times in the history of our nation regarding Social Security and other social programs. We are back to a very blunt difference between the two parties. These differences are more divided than we have seen in generations.

For example, Medicaid pays 65% of all nursing home cost.[See Source]  Social safety net programs are vital for our nation's seniors many who are poor. Besides, these cuts we have Trump falling in line with the standard GOP assault on retirement security and the security of disabled people. The exact opposite position he took while running for office.

Now we have something going on we haven't seen in a generation. Which are appropriate hearings in the House, in this case, a Social Security Subcommittee on expanding Social Security? There are a couple of proposals to do that, and the recent hearings were on representative John Larson's (D-CT) proposal to extend social security benefits. Now it's not the most left of the recommendations out there, but it has enormous support, and it does increase benefits.[See Source]

Its got more than 200 co-sponsors meaning it's well on the way to passage before it even gets put up for a vote. The recent hearings to this writer say as much as anything else the crossing of a symbolic barrier. Because as far as the House of Public Discourse knows it hasn't been since Social Security expanded in several ways in the 1950s that we've had the House of Representatives holding serious hearings about expanding Social Security.[See Source]

What About Medicare and Medicaid?

In the case of Medicare for all its support for it has almost become an affirmation of moral values for a society. Also, the aid of a specific policy because of it words like access are words that some of us have come to view with particular concern and healthy skepticism.

Access to something you can't afford for example isn't accessing at all. " We the People" can debate the specifics of the " Medicare for All" bill put together by representatives; however, in the House of Public Discourse, we think it's excellent and compelling.

But the underlying values behind it are that its costs should not be a factor in getting the medical care you need that medical care is a right. In the same fashion, people are now saying it is a shame when someone dies because they feel they can't afford a  co-payment for prescribed medicines they need to control a severe illness.

In doing so, whenever someone who is on Disability case is challenged or upon appeal, there will not be enough personnel to prosecute the claims. People could have their benefits cut off, and it is another way and draconian one 1984 way of demonizing the people who these benefits are supposed to be here when we need them.

Just another way for Republicans including Trump to depreciate people who do need this help and make them seem like the other. Isn't it comical that the Republicans have always complained about intrusive government want to impose such a kind of police state activity on our own lives?

Written By: Johnny Hill
Posted by Johnny Hill at 3:16:00 PM No comments: