Is Capitalism A Threat To Democracy?

It is stunning following the Wall Street crash, how there has been no expression from any key player from Wall Street of regret or apology for having brought down the entire economy. Nor is there any sense of shame or embarrassment in their continuance to extract exuberant bonuses for producing nothing for the whole of society. There are even traditional conservatives who hold this view. This writer comes from a traditional conservative background. I grew up in a small community in North Carolina called Rosewood. My family raised me to believe in local control, community responsibility, and community values.

However, over a period, I came to realize there are two different definitions of conservatism in the Untied States. One is about the aforementioned traditional values that my family raised me up to believe. I can honestly say for the most part they brought me up focusing on the positive aspects as opposed to the hate element we see in conservatism of today.

The traditional meaning of conservative is a monarchist. One which advocates monarchical rule.[Source: Dictionary.com] The word originated when the term democracy took root in America. The Conservatives were the ones defending the monarchy and central control.  Tension has developed among Conservatives who believe in  global elitist government and those who believe in local and state control. In many ways based on this "writers" understanding of conservatism, there is reason for concern when you see a concerted effort to centralize control.


The world today is all about globalization. The global economy. Huge corporations are parading as a person. The whole dynamic that we have been introduced to as globalization is a process driven by these companies for their corporate interest. They want to eliminate national boundaries, and reduce the capacity of governments to create regulation that maintain a sense of community interest and national interest in the economy. Companies have consolidated their power to rule the world without any democratic accountability. What is interesting is the counter to this corporate globalization. The behavior of these corporate entities has awakened the American people and restored the desire to return to a time when community values and keeping the local, state, and national economies close to home. There is now a globalization of people power. In my view, within this framework we must learn as a society how to work together collectively regardless of  one's political ideology.

You Cannot Have A Capitalistic Democracy!

In many ways, capitalism and democracy are a contradiction of terms. Think about the Milton Friedman's and Ron Paul's and the whole Libertarian babble about free markets and freedom. At best, their sense of freedom is restrictive. It's not the freedom of the working person to control their lives as they see fit.[See Source]  The Libertarians don't like democracy. The freedom they speak of is the freedom to submit oneself to control by a higher authority.[Free Markets] [See Article] The reason the Libertarians don't like democracy is because they are Capitalist. Libertarianism in the United States is, in fact, an extreme example of what true Libertarianism is not. They are in favor of private  tyranny. The worst kind of tyranny!Tyranny by unaccountable concentrations of wealth. When they [Liberitarians] say we don't want government interference in the markets, they mean it. The type of intervention they want to block is the kind that would permit constraints on the utterly irresponsible behaviors of the super-rich.

Corporations are a prime example of private tyranny.

It's worth bearing in mind how radical in opposition this is to classical liberalism.


Modern-day Libertarians love to invoke Adam Smith.  But, if you read Adam Smith he said the opposite. Libertarians claim Adam Smith was opposed to any form of government control. This presumption is not valid. Adam Smith was in favor of government regulation as he put it "when it favored the working man." He [Adam Smith] was against interference when it benefited the masters. That is classical liberalism. Libertarianism as called in the United States is a concocted methodology which is a complete contradiction to classical liberalism principles. It is astonishing the amount of people especially young people who are attracted by this complete fabrication by design. They say Adam Smith; they invoke him all the time. He was an icon of his time. Many factions considered Adam Smith a radical in his day. Why? Adam Smith was very much an anti-capitalist. Smith condemned the vile maxim of the masters of mankind. All for ourselves and everyone else could just " fend for themselves." Sound familiar! It was Adam Smith who championed the phase and doctrine called the invisible hand.

What is Meant By The Term " Invisible Hand."

Adam Smith rarely even used the term invisible hand. The term is mentioned once in his signature literary work " The Wealth of Nations." The context is an argument against Neoliberalism. Smith argued that if a company in England invested abroad and imported from abroad it might  be profitable for the business but would be harmful to the people of England. Sound familiar! However, they will have enough of a commitment to their country. [home-bias] That if by a. " invisible hand," they will keep to the less-profitable actions, and England will survive what we now call neoliberal globalization. To summarize, England was at the time an agriculture producing nation. Suppose some landlord accumulates an enormous amount of land. This reality creates a situation where everyone else has to work for the owner. Smith held the position that this would not turnout to badly because the landlord will be motivated by his natural sympathy for other people that he will make sure the essentials of life will be equally distributed. This practice in turn will create an equal distribution of wealth as by some invisible hand. 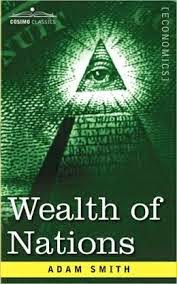 In Wealth of Nations, in the first couple of pages Smith talks about the butcher and his interest. The baker and his interest and this conflicting interest created what came to be known as a division of labor. However, how many have read a couple hundred pages into the work where Smith bitterly attacks the division of labor. Smith pointed out if you pursue the division of labor people will be directed to actions that they will repeat the same mechanical operation over and over. What this reality does is deskill a person. Smith advocated this would turn people into stupid and ignorant as a human can get. Therefore, in any civilized society the government will have to intervene to protect the will of  " We The People." This view is very different than the one held by Libertarians today. A Capitalistic Democracy would self-destruct and for the most part did during the Bush II administration and after decades of Reagan's trickle-down economic theory which mirrored the invisible hand concept. And, with the current time disparity in the distribution of wealth this hand has surely been invisible.

Reagan's Trickle Down Was A Prime Example of the Invisible Hand Debacle!